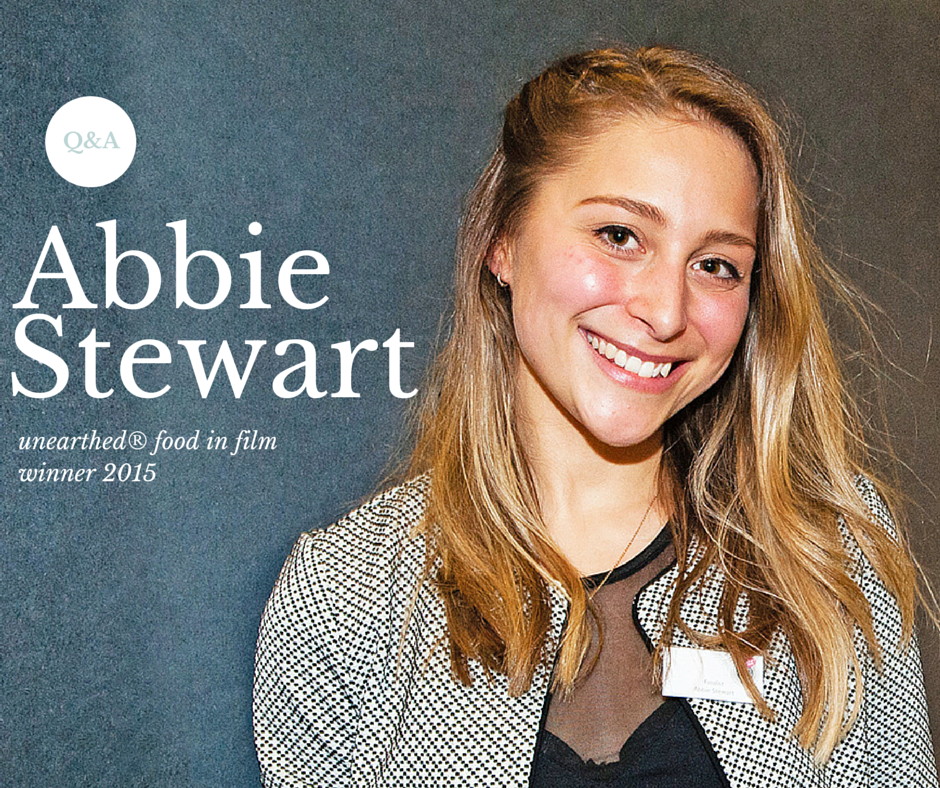 Abbie Stewart, a 20 year final-year student was our winner of the unearthed® food in film award 2015 – a category of Pink Lady® Food Photographer of the Year 2014. Her lovely film ‘The Cider Shed’ came about after she began photographing The Cider Shed but felt there was a better story to tell to bring it to life. She took some time to tell us about her film and how her reasons for photographing interesting characters has carried over into her film-making.

Tell us a bit about yourself
I’m originally from Colchester in Essex, but moved to live in the beautiful, rural countryside of Dorset when I was four. I ‘m now 20 and currently finishing my last year of University. After that I’ll be  spending my first summer away from education in Zimbabwe, Africa, to volunteer for 10 weeks. Aside from photography, I love keeping fit, eating good food, travelling and watching countless amounts of ‘Friends!’!

How long have you been working in the industry, what’s your background
I’ve been studying photography for 5 years. Living in a small village in Dorset has opened my eyes to the different creative and interesting events that happen in the area, which are perfect to document. I photograph people because I love meeting interesting characters with a passion for  what they do for a living or as a hobby.

Did you study photography or film at college/university
I studied photography whilst at 6th Form college and continued on at University.  I wanted to apply to a course that didn’t have a generalised title of ‘Photography’ as I felt that I could get completely lost amongst the amount of possibilities. Instead, I looked for a course that had some form of focus within the industry, leading me to Gloucestershire University, where I have studied Editorial  & Advertising Photography for 3 years.

When did you first start making films
I realised my passion for filmmaking when I began my project on ‘The Cider Shed’ in the second year of University as part of a module focused around subcultures. I then revisited  it in my final year. I made a book on ‘The Cider Shed,’ but felt that it still needed to be documented even more.  I felt people would need and want to see what the atmosphere was like and how they men come together and work as a strong community; so I began film-making.

Is film your main job or a hobby?
It’s definitely both for me. I can’t stress how important it is to be passionate about what you do, especially within the photographic industry. Personal work is essential, you need to be constantly shooting and having interesting projects on the go. The industry is interested in your own personal visual language and if they like what you do then they’ll pay you to keep doing it.

What was your inspiration for ‘The Cider Shed’
It was actually my Father’s idea to photograph the shed and the cider making. Once he mentioned it I realised how unique and original the story was and I was determined to make the most of it. The men are all such characters, which allows it to be even more fun to photograph and film.

How long did the film take to make?
I shot the film over a few years, going back each time as I gained new experience from University. Once I knew how I wanted to film it I allocated specific aspects to focus on at each shoot. Overall, I did around 6 shoots of filming and countless hours of editing.

Who was on the team?
I filmed, produced and edited all of the film by myself. However, I always had guidance, advice and constructive feedback from my tutors.

What was the hardest/most difficult thing about making the film?
Deciding whether or not to have a voiceover or narration. I did get my Father to record a voiceover about the process of making the cider, however we decided it wasn’t needed and if anything it became a distraction from the visuals of the film.

Another difficult task was editing the film down from the original 5 minutes to 2 minutes for the competition. I focused on not only the process of making the cider, but also on their characters and the atmosphere in the shed. But I had to consider what was appropriate for the competition and so I edited out the majority and focssed on the cider-making process

What gadget can you not do without when you’re filming?
Aside from my Canon 5D Mk III, I couldn’t have done without my Zoom H2n Portable Recorder, it’s  so easy to record clear sound, making the editing process much easier!! !

Where did you hear about the unearthed® food in film competition and how has winning helped your career
My tutor mentioned it and said that my film would be perfect to enter. Winning has allowed me to see how I can adapt my work to fit certain publications and genres of photography, opening my doors to new possibilities. It has given me the confidence to pursue my filmmaking and I am now freelancing as a filmmaker and portrait photographer!

And now for some foodies questions!

What’s your favourite dish
That’s a difficult one! I love food so much, in terms of a takeaway it would have to be either fish & chips (only from Lyme Regis!) or an Indian. However, if I am cooking then it has to be a vegetarian lasagne

What’s your most memorable meal
That has to be my Nan & Dad’s roast dinners, they bring the family together and taste amazing every time