Action Against Hunger: donations, olives and a re-brand 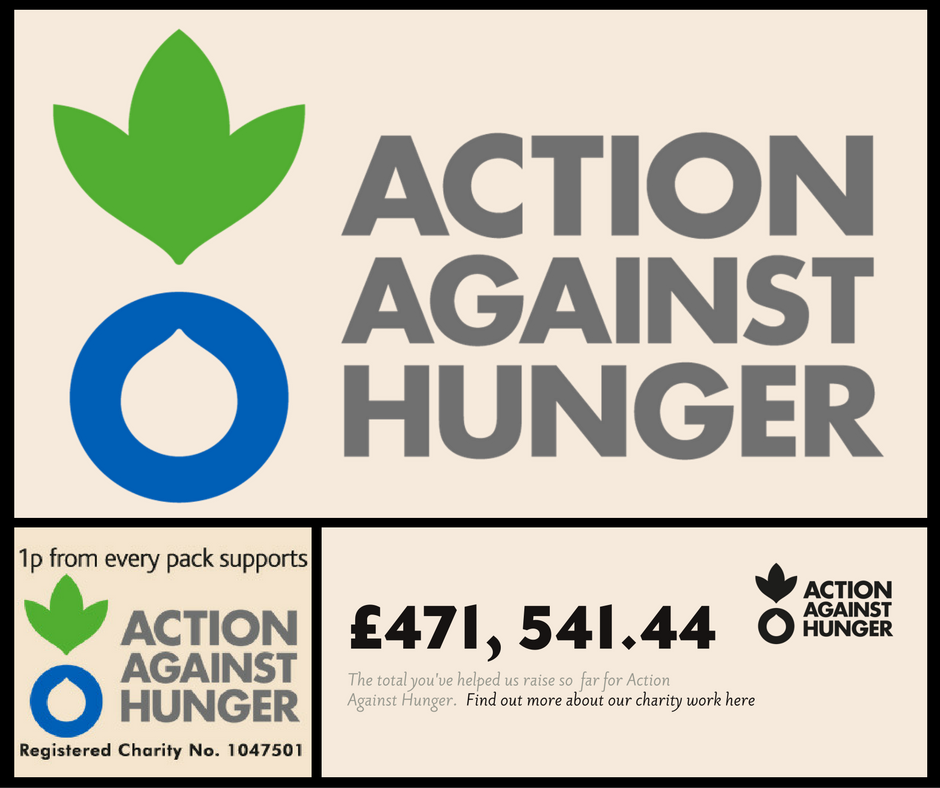 We’re creeping ever closer to our Action Against Hunger half a million pound donation mark! Since 2010 we’ve been donating 1p from every pack we sell to them and its surprising how quickly those pennies add up. At the end of September our total was £471,751.00

We’ve reached £471,751 in donations to Action Against Hunger – all thanks to your pennies, from each pack sold

We think that we’ll be hitting the half million mark early next year and so we’ll keep you posted on how we’re going to celebrate this momentous achievement!

Simon recently went to a briefing by Shashwat Saraff, the Regional Operations Director for Asia, who was explaining more about the work that is currently being done in India – and where your pennies all go. We’ll have an update of that coming soon.

Back in September we launched a limited edition line which we produced in conjunction with Sabrina Ghayour. As a long-time ambassador of Action Against Hunger she was keen to lend her time and expertise to help us develop a special line which would donate 10p to the charity, instead of our regular 1p. Her delicious Mixed Olives with Artichokes and Feta product raised an additional £3,350 towards the project in India that unearthed’s donations are funding.
We were delighted to work with Sabrina and she remains not only a friend of our brand but a dedicated supporter of Action Against Hunger.

And finally, you may notice that the Action Against Hunger logo has changed. We’re in the process of changing it on-pack and the website will feature the new logo very soon (if not already by the time you read this post).

Jean Michel Grand, Executive Director of Action Against Hunger says that they are changing their corporate look and “we move towards a new global identity: a new identity that more clearly and powerfully explains who we are and what we stand for. We are convinced that it will enable us to have a bigger impact on the lives of vulnerable people, bringing us ever closer to our vision of a world free from hunger.”

So look out for the new logo as we roll it out across pack.